Posted at 00:00h in News by Megapixel VR
Share 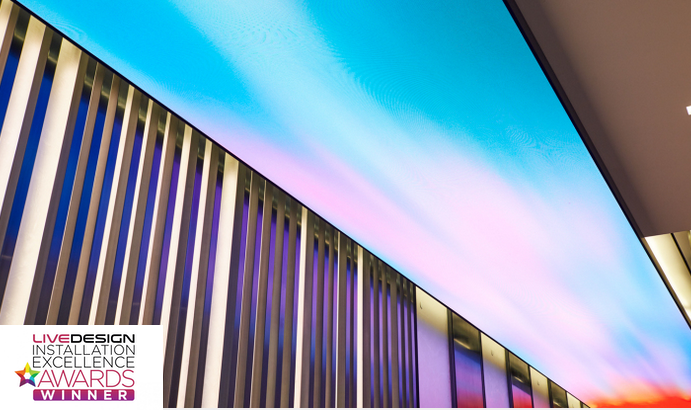 Empire State Realty Trust in partnership with Tactical Manoeuvre, Electrosonic, and Megapixel VR are delighted to announce their innovative lobby design has won Live Design’s Excellence in Installation Award for Themed/Experiential Venues. When Anthony Malkin, the chairman and chief executive officer of Empire State Realty Trust, set out to renovate the 537,839-square-foot office building at 250 West 57th Street last year, he wanted a lobby on its own to attract higher-paying tenants.

The new Gensler-designed lobby features a 75.7′ x 7.8′ art installation in the form of a ceiling mounted 8K LED screen in the lobby created by industry veteran Jeremy Hochman of Megapixel VR. This unique installation utilized Megapixel VR’s proprietary Rec. 2020 LED technology and 4K processing to complete the transformation of the repositioned building lobby, modernized for the 21st century.

“When Marc Brickman approached us with this concept, we were excited to help engineer such a challenging project,” said Jeremy Hochman. “This was the first application of our Rec. 2020 color-capable LED display in a public space. The color performance and viewing angle are just stunning.”

The uniqueness of the screen comes from behind-the-scenes algorithms that provide information in real time. Online sources, such as weather, hashtags, and trending topics, allow the video artwork to adjust daily. As this input changes daily, the look of the video artwork will reflect those changes.

Every morning, the screen will show a sunrise across its length and weather in real time, then it moves into a variety of other timed segments. The next is news, which is scraped from news websites and flows on the screen with an abstract background. This section is followed by “morphing the present,” where pictures of people—celebrities and public figures—are blended and blurred.

Next is “sea of cities,” which resembles stain-glass windows where the images (taken from scenes in the five boroughs pulled from social media) move up and down, like the waves of an ocean. This is followed by a sunset with a variety of colors—think, Aurora Borealis. The 1s and 0s that make up these images are posted in the next segment called “source code.” Finally, there is “a questionable time,” which features black holes and planets at the end of the day.

Electrosonic programmed and installed the AV and control systems. The project demonstrated Electrosonic’s comprehensive approach and intramural teamwork with AV system engineering done by its Orlando office, fabrication by the Burbank, California office, and testing and installation support by the New York City office.