Posted at 07:14h in News by Megapixel VR
Share 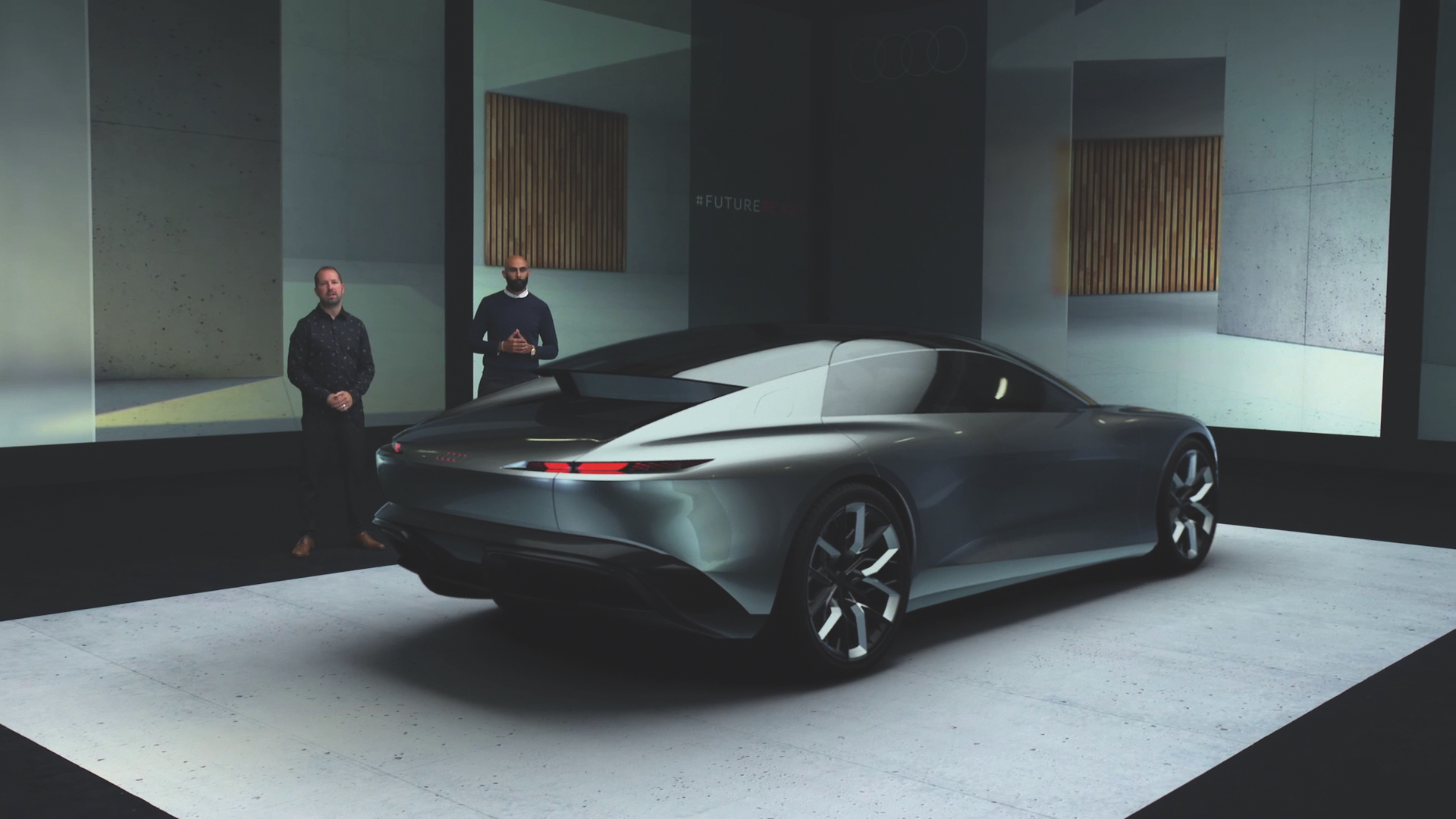 On-air Virtual Exhibit of Audi’s grandsphere concept car at IAA 2021 made possible with the power of GhostFrame’s patented technology.

October 2021; Burbank, CA – When SXCES Communication AG was challenged to bring their well-established Virtual Exhibit up to broadcast quality for the preshow of the Audi grandsphere concept launched right before the IAA, they set out to create something unique. Since solid tracking was crucial but seemed restricted by a very demanding studio setup, SXCES relied on GhostFrame’s unique technology for perfect execution.

“When we learned about GhostFrame in a call with TrackMen, we were very excited about it,” states Sebastian Kuhn, from SXCES. “The obligated studio setup hardly seemed to leave any chance for stable tracking. The most important area we were dependent on for tracking reasons was the LED floor, which was seamlessly integrated into the studio setup. GhostFrame offered the perfect option to integrate these tracking targets invisible in the setup, exactly what we needed. The production of the Audi grandsphere project as the first of our Virtual Exhibit on air was made possible by using GhostFrame.”

GhostFrame is a collaboration of AGS, Megapixel VR, and ROE Visual. These companies have combined their respective IP to enable the GhostFrame technology, adding TrackMen as the exclusive partner for the GhostFrame Track feature.

Both Faber Audiovisuals and Creative Technology Germany provided ROE Visual Black Marble LED floor panels running on Megapixel’s HELIOS LED Processing Platform. With the first tests with Audi and SXCES starting in early August, prep time was condensed. Fifty square meters of the LED floor was used for the presenters to walk freely while discussing and highlighting the features of the new concept car.

Working alongside the content creators for the preshow, GhostFrame was able to add a hidden tracking pattern to the LED floor, making it possible to position the 3D model of the car with hyper-accuracy. While the camera capture simply showed a concrete floor, the presenters could see the car’s outline and orientation during the event. This made the presentation very real; the hosts were able to interact with the car naturally. The positional accuracy also allowed mixing shots of the 3D model car with shots of the actual car.

“Being able to see the car means you can pretend to touch it or indicate even the smallest details. You don’t have to worry about walking right through the model. It’s there right before your eyes all the time,” comments Kuhn.

The Audi presentation provides a perfect example of the power of GhostFrame’s patented technology.

The setting for the presentation, selected by Audi, was deliberately chosen for its clean and straightforward style, ensuring attention would be focused on the vehicle and not its surroundings.Using traditional optical systems with markers was not an option for this setting; any marker would have been visible through reflection on the car or the car’s windows. Even a camera tracking system without markers would not work since the environment did not provide any natural objects that could be used as a reference.

Using the standard GhostFrame Track feature was the only way to make this presentation possible, allowing the camera to fly freely under the sizable light panel. The tracking pattern in the LED floor was at all times visible for the tracking system, but not for the human eye and the filming camera. In this setting, the system allowed freedoms of the original artistic intent of the room design and free camera movement..

“Even in very narrow camera perspectives, the tracking was rock solid,” states Thorsten Mika from GhostFrame partner TrackMen. “You can trust the tracking pattern to do precisely what it’s supposed to do, syncing the camera movement exactly with your content.”